The place is worldwide known because its superlative waves create the perfect conditions for surfing in Nias Island. Yet, apart from being a top international surfing destination, this island owns an invaluable cultural legacy dating back to the year 10.000 B.C. (First Nias Island’s inhabitants).

Not just  the best place to surfing in Indonesia but also a great history behind.

One of the most priceless characteristics of the Nias Island’s folk tradition is that the people kept it  almost intact and continued to practice their rituals up to these days. If it weren’t because of the trading they carried out with other villages and people, the island would have been isolated for ages. 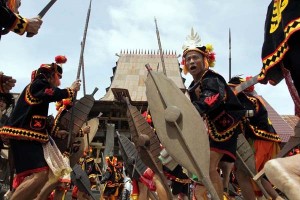 Although this is not an object of agreement among historians, there are some theories stating that this is one of the few living examples of a Megalithic civilization (a prehistoric culture that used to express artistically through enormous stone monuments). Ono Niha as they call themselves in the Nias language means “descendants of humanity”.

Nias people had a strict hierarchical 12 level caste system among which the highest grade was attainable only for wealthy men who could carry out long celebrations with thousands of guests and plenty of food. These leading men were called Balugu.

Niassian people’s economy was based on hunting, trading, agriculture and pig raising; and  were predominately a warrior people. They used to capture and trade slaves among the different villages. Inter-village wars were a constant in the island; this was an important influence to the architecture.

What to see in Nias Island

Nias Island has a remarkable tradition in architecture. Omo Sebua is the name given to the distinctive Niassian constructions. The classic houses were built for the village chiefs and were especially designed for defensive purposes: not only against enemies, but also against possible earthquakes, since the houses were exceptionally flexible. You could only access through a narrow stairway that had a trap door hidden. Their main observable characteristic is the dramatically convex and pointed bricked roofs. The structures were based on ironwood pillars and filled with bamboo stakes as another defensive strategy. All things considered, taking a walk through the villages is a must!

[alert-info]If you are looking for a budget place to stay and surf in Nias Island, please contact us following this link: Pleasure Surf Camp Indonesia[/alert-info] 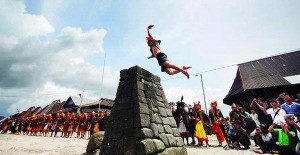 Tourists will also immerse in this tradition through the many rituals and celebration that people still perform. Most of them are war dances. The most famous of these ceremonies is the Stone Jumping, originally Hombo Batu. This was a virility ritual meant for pointing out the moment when a little boy became a man and it was ready to become a warrior. This initiatory step was actually a jump over a 6 foot stone adorned with sharp bamboo reeds at the top. (Read our Article “Stone Jumping in Nias Island” for more details). 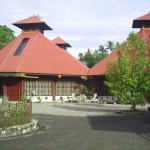 There are other many dances that the natives performed for tourists from time to time.

You can also visit the Museum Pusaza Nias, home for the Nias Heritage Foundation, located in Gunungsitoli. The museum holds an important collection of prehistorical objects representative of the island’s culture and history. Another interesting tip is that the museum now offers the possibility to stay at its guest house or even in one of the traditional houses. You can check their website for more information; . http://www.museum.pusaka-nias.org

If you are looking for a budget place to stay and surfing in Nias Island, please fill the contact form below asking for our special offers for surfers!

This website uses cookies to improve your experience while you navigate through the website. Out of these, the cookies that are categorized as necessary are stored on your browser as they are essential for the working of basic functionalities of the website. We also use third-party cookies that help us analyze and understand how you use this website. These cookies will be stored in your browser only with your consent. You also have the option to opt-out of these cookies. But opting out of some of these cookies may affect your browsing experience.
Necessary Always Enabled

Any cookies that may not be particularly necessary for the website to function and is used specifically to collect user personal data via analytics, ads, other embedded contents are termed as non-necessary cookies. It is mandatory to procure user consent prior to running these cookies on your website.