The Lagundri bay is a curved bay gulf forming a horseshoe in the South of Nias Island. The bay is house of the leading lady as far as Surf goes: the Main Break, Soraki Point or simply “The point”, however you want to call this classic surfing point in Indonesia. This break is considered second only to some of the most important ones in Hawaii. 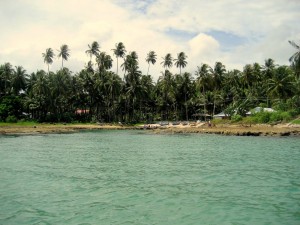 Since the mid ‘70s, when this world-class break was first surfed by a group of “Aussies” (Australians), Soraki has been receiving surfers from all around the globe. The place evolved from an original secret spot among a couple of daring friends, to being house for several international competitions during the ’90 (Also the World Surfing Championship in 2000). “The point” has the most epic right handed barreling waves over a coral reef (That’s where it gets its name: Sorake means numerous reefs according to the locals).

It is notorious because of its effortless paddle out and the progressive, round-shaped, energical tubes which have, according to the surfers, reached 15 feet, although regular waves measure from 3 to 6 feet. Usually it is not a highly crowded spot and the break has a consistent frequency (150 days a year). 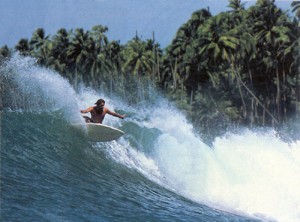 The Soraki Point is recommended only for skilled surfers. However, after dying in deep waters, the Point produces a lower decreasing sloppy swell that breaks again a few meters to the left in what is called the Kiddies Corner, a perfect break for beginners and children to practice.

Most of the Breaks in Nias has been accentuated after the 9.2 (on the Richter scale) earthquake that strucked the island from the North in 2004. The ocean distorted the geography of the Island, eating parts of the land and withdrawing from some others. As far as surfing is concerned tubes are becoming more curved and increasing in length. While before the earthquake waves lasted 7 seconds, now they may get to 9.

The Island is nick named “All time Nias” after the continuous set of waves delivered in the Sorake Bay. Anytime is a good time here. However, the best time is during the dry season, from June to September. Most Surfing competitions are held in June and July.

Although Sorake is the core break in Nias Island there are many other points. Read our article “Best Surfing Spots in Nias Island” to fin out more.

This website uses cookies to improve your experience while you navigate through the website. Out of these, the cookies that are categorized as necessary are stored on your browser as they are essential for the working of basic functionalities of the website. We also use third-party cookies that help us analyze and understand how you use this website. These cookies will be stored in your browser only with your consent. You also have the option to opt-out of these cookies. But opting out of some of these cookies may affect your browsing experience.
Necessary Always Enabled

Any cookies that may not be particularly necessary for the website to function and is used specifically to collect user personal data via analytics, ads, other embedded contents are termed as non-necessary cookies. It is mandatory to procure user consent prior to running these cookies on your website.